The end of the trip to the South of Germany :)

Ok before i begin i think i should include the links to previous entries related to this post as i promised. 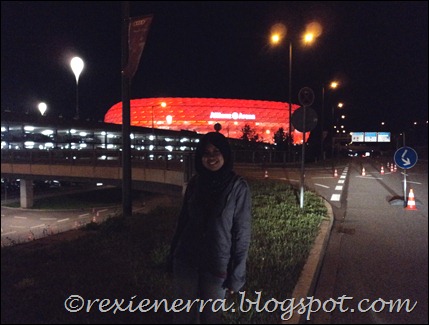 As i promised in the previous entry; Partnachklamm-Garmische.. I stop by at a place called.. Allianz Arena, Munich. Well actually i was excited cause i am kinda a football fan.. so it was definitely something which i will never forget. Germany was hosting Audi Cup 2011 at that time and i took a picture of me and the stadium which is the Allianz Arena while Barcelona and Bayern Munich having their match. The stadium turns red since their home team is playing. Supposedly they will change colour 4 times i guess, i could not remember but you can google it and read more about it. Im lazy. I know.

Being vein.. so here is another snap of me infront of it. Ok stop being so excited will you! 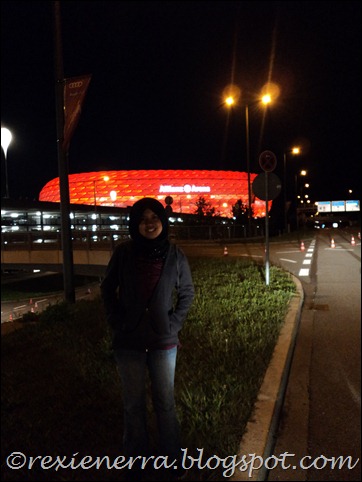 Well that was it. I know it is not such a big deal but then i actually wanted to visit that stadium so bad and i thought i can’t see it but on the way back Faiq stopped by and i was so happy. Not to mention Bayern Munich was playing together with Barcelona and i actually just bought something like token to remind me of Bayern Munuch team. So yeah a bit jakun there for awhile. LOL. So that was the end of my journey to the south of Germany and the next day i was on my way back to Stadtoldendorf for a week before heading back to Belgium. Time flies.

That was about one week journey. Thanks Mr Wendt for giving me some time off from work and thanks Aunty Anne for everything and of course thank you to my parents for their endless support :)